HOME > Weblog > The Negative Other 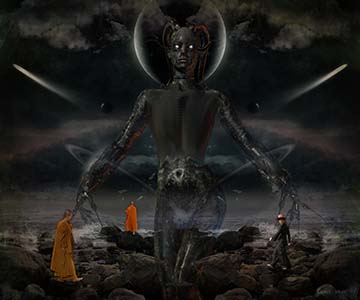 Everyone has a negative side to their personality. Seth calls this repository of all things shameful and unbearable The Negative Persona. The way to heal your negative persona is to work on yourself. Practice the Human Virtues, as Seth tells us. Master the art of Courageous Loving. Learn how to express the negative aspects productively rather than repress them. Integrate the negative with the positive aspects of your personality and evolve your Soul.
The way to heal the collective projection that we are calling The Negative Other is to see your own reflection in it as you observe it in the Negative Media and in the behavior of misperceiving humans. You see it, identify it as being part of you also, and then you work on that perceived negative aspect. Again the Virtues come in handy here. The negative then becomes an asset when you honor it as a part of YOU. This seems to be an excellent way to discover your Issues: those aspects of personality that affirm your Ego/Intellect rather than your Spirit, or Source.
A Common Falsehood All of this is based on the common mistaken notion that what you see in others is the reality or the truth of them in the moment. In truth, what you are usually seeing are your own projections. When you assess another human being as negative in some way, you are projecting your own Issues onto them and responding to that projection. When you say another is greedy, or stupid, or sinful, you are in fact being triggered by that person to identify these characteristics in your own personality. Because it is shameful and sad to admit to these deficits, you disown them: you literally project them onto others and then identify them as the problem. It is easy to do.
The Negative Persona The Negative Other portrayed in the illustration above suggests common stereotypical projections. Dark skin, meaning not white. Negative. There is a transgender feeling to the composition. This is not a strictly masculine or feminine figure. Again, not the norm, not heterosexual. Bad bad bad. And yet with these perceived negative aspects, this figure has power. It is almost overwhelming. I think this represents the explosive potential of the repressed Negative Persona as it attempts to find release and expression.
Poison into Medicine The spiritual practitioners in the illustration above seem to be doing their work of exorcising the destructive energies of the The Negative Other. That is what the practitioner does individually as they go on their Paths of Awakening, identifying their Issues and Learning their Lessons, and that becomes also the healing effect within their collectives. As the individual heals and awakens so does the collective heal and awaken.
Are We Waking Up or Not? The way I see it, in terms of a political/social/spiritual spectrum, the Trump supporters and the BREXIT advocates occupy from the middle to the Right of the political spectrum and the Progressive Berniecrats and the Love and Light people occupy from the middle to the left. Both groups, however, are awakening at this time. Both groups are discovering the truth of their realities. And I think the solution is still the one Seth talks about in his latest books: Loving Understanding. This perspective sees The Other with all their faults and failings and still Loves. The admission of Love allows the recognition that we are all one, not Left or Right, but ONE people trying to do the right thing.