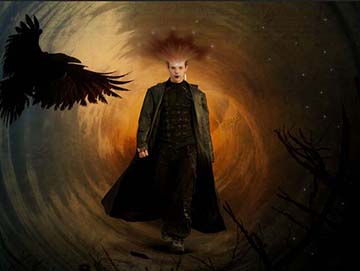 The image is a powerful one: A man dressed entirely in black emerges from the darkness of the unknown reality accompanied by a huge crow. He appears to have a sense of purpose. He does seem to be powerful. He definitely appears to be in charge of his own destiny.
The Male Magician Who is that guy and what does he represent? I would say that this image aptly illustrates what you might call the "archetype" of the magician from the masculine standpoint. It illustrates who and what we are in the physical dimension when we are at our best as a male Reality Creator.
As you may already understand, all of us are Reality Creators. And You create your own reality, the first precept of the Seth teaching, is actually a magical affirmation. To create your own reality is to make magic in the material world. As a Reality Creator you continuously supply your Personal Reality Field with the energy of All That Is in the form of the familiar Reality Constructs that populate your world.
Further, and this is a simplification of the theory that Seth first presented to Jane Roberts and her husband, your creative output contains both conscious and unconscious projections. For example: You are making yourself breakfast. Consciously you put out some healthy ingredients to use, for you are mindful of your health and the positive effects of eating wholesome foods. But subconsciously, in a type of negative Trance State, you sabotage these efforts by including unhealthy foods. Seth calls this experience of responding to unconscious desires, "being in your Issues."
Choosing Wisely Thus, according to Seth, the first step in the awakening process, is to become aware of those times when you are in your Issues and creating your world unconsciously. Then you realize that you have a choice in each moment. And the awakening student begins to make a habit of choosing wisely, of choosing to create consciously.
They take on the identity of the magician, you see. The magician, by definition, uses natural forces to create consciously. I would say that as the student of this material begins to awaken, as they practice the techniques, they are awakening TO the natural world. They begin to ally their energies with the energies of the natural world.
The Female Magician 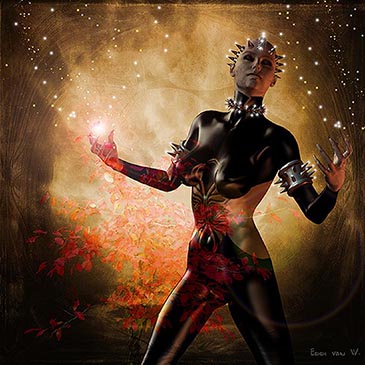 Consider this illustration. It is one we have used before in a discussion of the Dark Goddess. In my opinion, if you practice the same techniques and Teachings, you will get roughly the same results, regardless of gender. The first precept, You create your own reality, is neutral, I believe. In other words, you are capable of creating Positive Realities, Negative Realities and/or everything in between those two polarities. Seth puts it this way, "The universe is reflexive, responsive, alive. Your Personal Reality Field strives to create on the outside, precisely what you are experiencing on the inside, within your mental landscape, Dear Reader."
The woman in the illustration is emerging from the darkness. She too has confronted her Dark Side and assimilated that material. She too is quite busy turning the darkness into Light, turning Poison into Medicine. She too is experiencing the power that comes from ruthless self-reflection..
Virtue One final point: As you embody the identity of the magician, Seth suggests that you refer to the Virtues of Humanity as a guide to using the powerful Reality Creating energies responsibly. This is important, I think. Others who have gone before have found it useful to defer to those positive states of consciousness in their practices. By assuming Virtue, you keep the Negative Persona from achieving ascendance. Talk to you next month...
CURRENT MOON
lunar phase