HOME > Weblog > Of the Stars 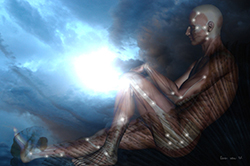 In Seth's first two books that he wrote with us, he mentioned cryptically that we humans have "star origins." And I must say that I was a bit skeptical about that back then. The information seemed to me at the time to be too "far out" for the Seth readers to accept. But now it makes perfect sense, considering what Seth has told us in his later books, especially Seth on Death and the Afterlife.
Here's an excerpt from Book One, 911: The Unknown Reality of the World:
Your etheric body... operates your physical body much as you operate a car... There are many other body types available to beings based on their point in evolution and the planets they choose to experience life on... Many planets that you would deem uninhabitable are teeming with life... When your etheric vision is developed you will be aware of a whole new world.
Here's an excerpt from Book Two, The Next Chapter in the Evolution of the Soul:
There in the stars are the origins of your races on your Earth. From your ancient tales of star gods seeding the Earth with human beings, to your 'science fiction' tales of extra-terrestrial visitations, all of these so-called myths and so-called fictions hold elements of the truth about your TRUE beginnings.
And here's an excerpt from Book Ten, Seth on Death and the Afterlife:
The you that you are, that you know as you, did exist first within All That Is and was then expressed in an energy body that you know as a star within a star system. This extra-dimensional system included other bodies that you call planets, moons and the ephemera of cosmic stuff you know as comets and other material.
Star Light Now according to Seth, we are composed of Light. The Consciousness Units that make up our flesh, our bones and organs, are essentially light particles that assemble within an electromagnetic field to create us - humans in the Third Dimension. But as Seth mentioned in the quotes above, our bodies are the physical counterparts to our non-physical etheric Light Bodies. As Light Beings we exist extradimensionally in the Fourth and other dimensions.
Star Being This star heritage of ours does make it difficult to discuss our origins. For if Seth is right, and we do exist eternally, outside of linear time in our etheric bodies, it is more a matter of thinking in terms, not of origins, but of multidimensional existence. In other words, perhaps we are of the stars quite literally NOW, even as we are all also living our many reincarnational existences throughout time past, present and future. The NOW that I mentioned refers to the current spacious now moment that Seth talks about in his books. It is from within this NOW that we can explore our other lives, and even, theoretically, our star existences.
The New Consciousness Whew! It's a lot to process, isn't it? But it does explain, to me at least, the phenomena I have been witnessing as I get a glimpse of what Seth calls the Post Shift Environment of the New Consciousness. For some of us, it is becoming easier to entertain a very complex yet integrated view of our Simultaneous Lives. It begins with contacting the Source, the Guides, the Angels, and so on. Then, as these relationships grow and intensify, the impossible becomes commonplace, to coin a phrase. As we learn how to own our greater creaturehood, as Seth calls it, our perspective broadens, our belief systems open up, and what was once merely a fleeting supernatural vision becomes the ongoing story of our lives.