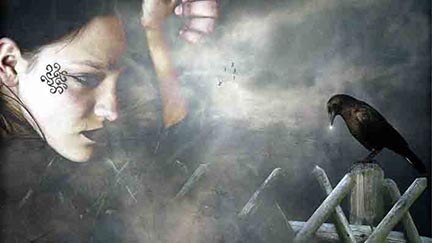 Living at the edge of a forest allows for contact with many types of wild critters. We are well-acquainted with turkeys, squirrels, deer, owls, crows, bats, woodpeckers, eagles, coyotes, hawks and the occasional bobcat.
Inside the house, we have our little extended family of rescue animals, currently a mixed breed doggie named Bella and two cats, Stevie and Vanna Gough. And we also honor the big picture with regards to animals: the Animal Spirits, or what you might call the archetypes of the individual animals. As you know, throughout history humans have cultivated relationships with wild animals, domesticated animals and the Animal Guides.

What did the sage say to the hot dog vendor?

Make me one with everything.


What to Tell the Neighbors

For the Seth Student, this is your rationale for human/animal communication on these three levels. "You are a part of everything and everything is a part of you," as Seth stated in his book All That Is. It works like this...
Everything in our system of reality in the Third Dimension is composed of Consciousness Units. This includes humans, animals, everything. These CUs are holographic and telepathic. This means, that as a Scientist of Consciousness, the Seth student may develop communications with animals, insects and even inanimate matter such as rocks, air, fire, etc. But here we are concerned with animal communications...


The Familiar Cat and Dog

We are a pretty normal family. My wife has her beloved dog and I have my cats. We know what our pets are thinking. You may be familiar with this phenomenon. Additionally, it seems as though our animal friends know what WE are thinking. They certainly act as though they know. The witch's familiar comes to mind here. The occult practitioner uses the familiar as a means to carry out activities, such as finding out secret information, and a host of other duties. Remember the Telepathic Network that Seth has spoken about in his new books? This is what you tell the neighbors when they see you mind-melding with your dog.

Your neighbor looks at you funny when you are caught having a mental conversation with your dog. Just say, "We were just exchanging eMails on the Astral Plane."

A few weeks ago I stopped the Prius to allow a coyote to cross the highway in front of me. No one else was willing to stop for him, apparently. It was as though he was waiting for me in particular to stop and allow him to cross. As I drove past, he looked over his shoulder and seemed to thank me. A few weeks before that I spotted a huge bald eagle high in the sky. As I noticed it, it immediately came down to greet me, it seemed, swooping down to within 20 feet of me in an open field. A few months before that, I was out in the forest and spotted a teenage mountain lion on its rounds. I rushed home, got my video camera, and returned to film the cat as it rolled around on the forest floor under a canopy of pine trees. At one point he saw me, acknowledged my presence, and then continued to play around with twigs and leaves, much like my domestic cats do. These contact experiences are the high points of my life in the country.

The woman in the picture above is speaking to the essence of Crow. She is communicating with the archetype or oversoul of Crow. As Seth has told us, over the millennia, as humans have worshipped the animal spirits, these Animal Spirit Guides have taken form. They are Gestalts of Consciousness that have a power and a reality about them. The gods and goddesses are empowered through worship, and so are these Animal Spirit Guides. Personally, I associate with Crow, Eagle, Cat, Owl and Bear. Each Animal Spirit Guide has its own domain, its own spiritual skill-set and its own countenance or image that it projects to the perceiver. And as Seth says, it is upon this foundation of information that the individual practitioner projects their own necessary thoughts, images and emotions to personalize and make real in the 3rd Dimension, this connection. When that happens, the student gains a very powerful ally indeed.

There is nothing like animal companionship to keep you in the Now Moment. We encourage the animal deficient reader to seek out companionship with wild things, by hiking in nature and exploring the wildlife in your area. For the animal deficient household, we highly recommend that you visit your local animal shelter and adopt the critters waiting for you. If you are a practitioner on a path of awakening, try tuning-in to an Animal Spirit Guide that speaks to you, that resonates. Let me know how it works out.