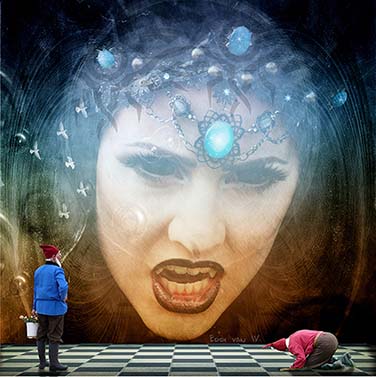 I am learning a lot, lately, about woman's power in the modern world.
We are in the middle of a Presidential Primary here in the US and there is a well-known woman running against a group of male Democrats and Republicans. Actually, there is another less-famous woman running for the office from the Green Party, Jill Stein, but she is almost the polar opposite of this well-known female candidate: Hillary Clinton.
Mean Girls Hillary Clinton, in my view, is a mean girl all grown up (MGAGU). Did you ever see the movie Mean Girls? A mean girl is a teenage girl with a heightened sense of self-importance. They are eager to adapt to the changing trends of pop culture. They can be bullies, at least that is how they are portrayed in the movie, and they hang out with other mean girls. Obviously, they are not prone to going on the journey of self-exploration as the awakening human is obliged to do: You know, the one Seth speaks to in his new books?
The Dark Goddess In my opinion, the MGAGU has not successfully navigated the developmental phase of girl-hood to woman-hood. The MGAGU sits at the center of the Universe, as an adolescent would, and makes demands of all those around her. The Toxic Princess, the Evil Queen, the Wicked Witch: these are the archetypes that govern this Identity. It has a powerful pull to it, too, this archetype. This may be so, because it is first the mother who must give direct orders to the growing child, to keep them safe from harm. Now as adults, we instinctively obey. It's for our own good.
The Visionary Leader Apparently, some women feel that it helps all women to support Clinton. But does it support men and children also? Does it support humanity generally? Does it support the environment, the earth and sky? I think Clinton's female supporters may be over-looking this, or perhaps they have not examined the record. The irony, of course, is that these concerns are historically the domain of the awakening woman: The Divine Feminine we call it in the New Age Literature, a cousin of the Visionary Leader. Clinton is not a Visionary Leader but she is pretending to be. Seth has said that the Visionary Leader identity is rising up to be acknowledged within the collective consciousness. This aspect of the Ancient Wisdom extols the highest good for all, in all endeavors. This perspective is not strictly a male or female construct, but it is obvious that the Divine Feminine is driving it. It is more than an expedient political talking-point.
Hillary's Awakening What happens in the personal awakening is this: the human being has a momentary awakening in which they see themselves as they truly are: a mean girl, for example. They assess that as repugnant and they promise themselves they will change, they will become a better person. They then do what it takes to become a better person, perhaps one who lives by the Human Virtues. Who knows, this could happen to Hillary before the year's end. She could have an awakening to Truth in which she sees the damage she has caused, and is ashamed, so ashamed, that she vows to change her behavior and become a better person. Perhaps she will hear the voices of the men, women and children who have perished needlessly because of her war mongering. It may be enough to push her over that Tipping Point of denial, such that, she will be able to let go of her obsessions with conquest and power.
Changing of the Guard We are, according to Seth, in a new era here on Earth. The Negative Leaders such as Hillary Clinton, who are still asleep, who refuse to awaken, who are still trying to bully us into compliance, are being pushed out by the Visionary Leaders such as Bernie Sanders the Independent and Jill Stein of the Green Party. We shall see how it develops. But I think we may surprise ourselves with our maturity of thought and behavior. When the time comes to do the right thing, for men, women and children, we shall. It's the most natural thing in the world...
CURRENT MOON
lunar phase